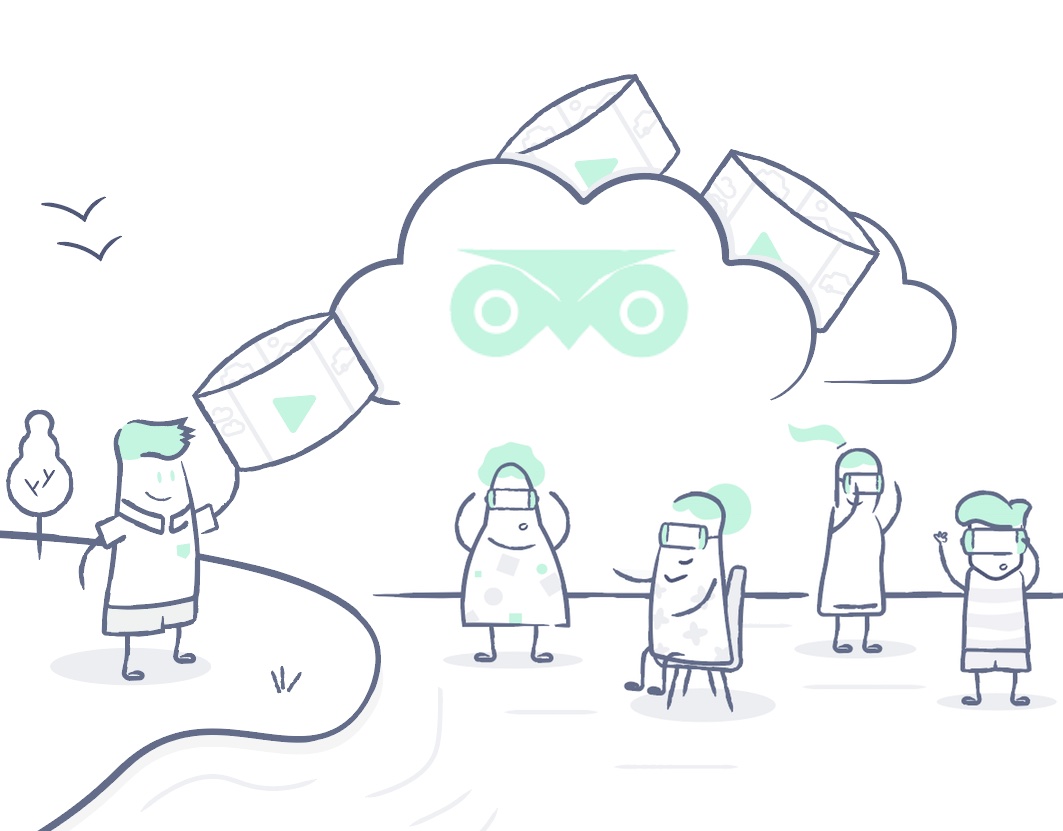 LensPass is a better way to share VR with an audience.


With no technical expertise needed, you can use LensPass to implement smooth and successful VR screenings using a variety of formats and customization options.

What phones and VR headsets are supported by LensPass?

Support for Daydream phones and headsets will be available soon.

What if I don't already own VR devices?

If you don't already have content to share, LensPass can help you select content from a variety of categories, including "Most Popular", "Entertainment", "Travel", "Art" and "Marketing".


How much does LensPass cost?

Once subscribed to LensPass, you can disable membership renewal at any time from your account settings.

LensPass is an integrated solution consisting of an online dashboard, an Android app, and a VR player app.

This section will walk you through how to use each one of these products.

You can register for a new account at WeLens.com, or from the LensPass app.

Tap the Add Screening button to create a new screening.


When setting up or adding a screening, you will choose a screening name and select one or more videos to use for your screening. You can also select a screening configuration and add optional customizations.

Note:: Your devices will be automatically assigned to new screenings if they aren't already assigned to screenings. You can add or remove devices from the Screening Overview page.

Using the Lenspass App for Android

The LensPass app for Android lets you manage and update each of your devices and control screenings. Start by logging into an account from the LensPass app. You can tap the Get Started button or the Account shortcut in the navigation menu to show the Sign In dialog. This dialog also has an option to Sign Up for a new account.


Once you are logged in, your device will be connected to your account and will appear on the online account dashboard. A short ID is assigned to the device and is generated from a longer hardware device ID.

The screening syncing feature is convenient and automated. When your device is assigned to an screening, videos and screening settings will automatically download to your device.

There are several other useful features offered by the LensPass Android app: Tip:: Whenever a video is downloading, it will appear in the Download Queue with the percent downloaded.

When your device is not assigned to an screening, launching LensPlayer from an application menu shortcut will open it into Menu Navigation Mode that offers various navigation options and opens to a menu of videos that have been downloaded or sideloaded into your device's welens folder. Once a selected video is playing, there are a variety of navigation controls available when you tap your touchpad:

When assigned to an screening, LensPlayer opens in a theater mode where normal controls and navigation features are disabled and viewers are in a cinema waiting area before their screening begins.

Screening options and advanced configuration options can be setup to customize LensPlayer for your screening.

Note:: You can launch LensPlayer directly from the Video Library tab of the LensPass app to directly load a video without using a saved screening configuration.

The LensPlayer app does not require the LensPass Android app, and without a screening configuration provided, it will automatically import videos from the following directories:


Setting up Your Screening

You can configure your screenings with VR video experiences and your choice of options.

Any device with the LensPass Android App can be used to remote control viewings on other devices. The remote control device and playback devices should be connected to the same WiFi network.

Preparing headsets for a remote control screening:   Once the video experiences have finished downloading on a device, launch LensPlayer and it will show a Theater Mode waiting area screen: Starting a remote control screening:   From the LensPass app on your control device, select the Remote Control tab from the navigation menu. This tab shows a list of any other devices found on the same wireless network. When devices are available, there is both a large play button that broadcasts a play command to all available devices, and small play buttons for each device that only broadcast commands to that device. You must hold down your finger for a couple seconds on the play button to activate it - this press and hold gesture avoids accidentally starting playback.

Once a video has started playing on a device, you should see its title along with for how long the video has been playing. During playback, you can use a large stop button or smaller stop button to respectively stop playback on all devices or just one device. As with the play button, a two second press and hold is required.

To optionally target a specific video to be played back from a selection of multiple videos, tap the small book icon to the right of the Instructions button as shown in the above screenshot. You will then be able to select a video to play, and can scroll with your finger to scroll through the list of available videos. Make sure that the playback devices already have any selected video file on their filesystem. Once you have selected a video, it will be displayed next to the book icon. To remove your selection, tap the book icon again and select the No Selection option at the top of the selection dialog.

You can also optionally specify a countdown of seconds for the screening that will display in the Theater Mode lobby before the screening begins.

Device Health Warnings: When a device has lower than 10% battery or has a temperature of greater than 37 degrees celsius, a will be shown over its device icon on the remote control view.

Any type of wireless network can be used for a remote control group screening. Internet access is not required. All devices must be connected to the same network - even a tiny travel router such as the GL-MT300N works.

The table below offers a convenient comparison between the three main screening styles to choose from.

"Synced screening" options are used to make all devices start playback at the same time. You can setup a custom image to appear in LensPlayer, by uploading an image at the Edit Screening page on the online dashboard. You can also customize the thumbnail images shown for each video by uploading images on the Edit Video page for each video.

You can also setup a custom message from your WeLens.com screening settings. This message will show to viewers before your video experience begins.

In some situations, you may not be able to successfully implement a remote control screening, or you don't want to wait for the specified scheduled screening time.

Double tap the small elevated "back button" on the right side of an idle headset to manually start playback.

LensPass automatically collects some basic reporting statistics that help you to determine audience engagement with your screenings.

Stats are available from the "Screening Stats" link on the WeLens.com dashboard page for each screening. If no statistics have been collected yet, some example stats are shown.

Statistics include a daily breakdown of content that was viewed and it can be filtered by device or by day.

The number of incomplete viewings - or viewings that were ended before the content was finished - is also included. Viewing sessions that last under 20 seconds are not counted as viewings.

Not seeing the latest stats? Statistics can be collected while offline, but you must connect your device to the internet and open the LensPass Android app to send the latest offline statistics to the WeLens server for this data to be included in reports.

The standalone Oculus Go device works well with our LensPlayer VR app and supports all of its features, including remote control functionality. However, there are a few issues currently affecting the Oculus Go that are not present on Gear VR headsets.

Controller is Required to Start Applications - All apps, not just LensPlayer, require the paired handheld controller to be used to start them. There is currently no workaround for this. A controller can only be paired to one headset at a time, and when using multiple headsets it is helpful to label controllers for the headsets to which they are paired.

"Enter VR" Lock Screen - After the headset is not worn for 30 seconds, an "Enter VR" screen will appear.

Normally, the handheld controller is required to exit this screen. Using the mobile Oculus app, it is possible to enable "Developer Mode" so that the volume button on top of the Oculus Go can instead be used to exit the "Enter VR" screen, as shown in the screenshot above. There is currently no way to entirely disable this feature.

When contacting support, we recommend using a built-in LensPass diagnostic feature that helps us better support you.

First, make sure your device is connected to the internet. To send device diagnostics, navigate the LensPass app to the "Device" tab, and tap the "Send Device Diagnostic" button. You'll see a notification confirming that the diagnostics have been sent successfully.

If you are contacting us with a specific event in mind, it can help us best assist you to know the following:
Send Message

Subscribe to our monthly newsletter to get the latest WeLens updates.
Each month you'll also be entered to win a free VR device!

We are now selling a limited quantity of Mobile VR Kits!
Each device comes fully setup with VR software and apps